This is a path-finding model using the A-star algorithm to find the shortest path. The models uses the map of George Mason University, including the buildings, walkways, drive-ways, and waters. Commuters randomly select a building as destination, find and follow the shortest path to reach there.

The following is the original map this model uses. It has been simplified in the model for faster computation. 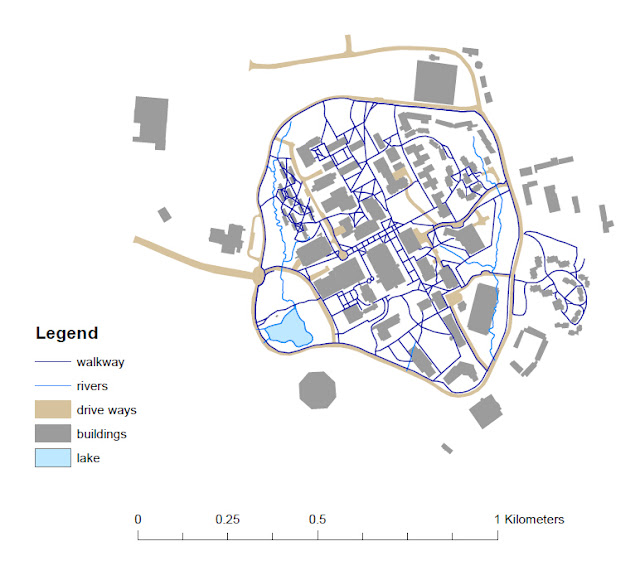 Here is a video showing the process:

The code for path selection can be simply explained as following:

Each node has a variable "distance" that records the shortest distance to the origin. It is set to be 9999 at default. The origin has distance 0.

The loop stops when all nodes have updated their neighbors, in other words, no node can be updated with a shorter distance. The nodes of the shortest path are then put into a list for the commuter to follow.

How is the map simplified?

For faster computation this model simplifies the original data by reducing the number of nodes. To do that, the walkway data is loaded to the 20 x 20 grid in Netlogo, which is small, and therefore, many nodes fall on the same patch. In each patch, we only want to keep one node, and duplicate nodes are removed, while their neighbors are connected to the one node left.

Also, links are created in this model to represent roads. This is so far the best way I can find to deal with road related problems in Netlogo. However, because the way I create links is to link nodes one by one (see code for more details), so some roads are likely to be left behind. But again there is no better way I can find. Therefore, I also used a loop in setup to delete nodes that are not connected to the whole network.

The code and data is here:
https://github.com/YangZhouCSS/roads/